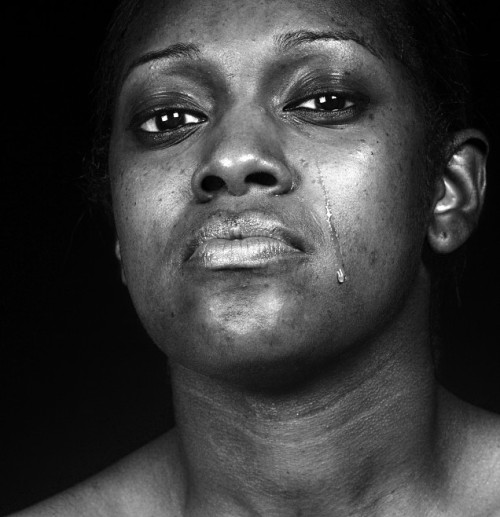 I recently had an epiphany of sorts. You see, I was having a conversation with two other Black women about crying. Another Black woman and I admitted that it took a lot for us to cry. Things had to keep building up before the metaphorical dam burst and allowed us to actually shed a few tears. On the other hand, we both admitted that we had no problem showing anger. (My anger usually takes the form of cold silence). One of my friends made a valuable observation- it has always been acceptable for Black women to display our anger. Crying and vulnerability…not so much. How true! When I do a quick scan of my childhood, adolescence, and adult life I realize I can recall numerous times when Black women displayed their anger. Whether it was in the Black community or in the larger society, a pissed off Black woman can at times be a source of entertainment or amusement. However, it is not every day that I saw Black women cry or show their vulnerability- especially in public and especially in the presence of strangers. We had to maintain our cool and as the old adage says, “Never let ‘em see you sweat.”

In my childhood
Growing up, like many Black children, I was forced to suppress my emotions. I did so out of fear of adult punishment. Whether the adult was a parent, other relative or family friend they all said the same thing when I’d burst into tears: “Shut up before I give you something to cry about.” It didn’t matter if my feelings had been hurt or I needed to release my emotions. The threat posed by those words forced me to choke back my tears or face physical punishment. I also recall relatives saying things like, “You’re too big to be crying like that.” As a result, I learned it was unacceptable to release the pain I felt through tears. No one wanted to hear a wailing Black child. When I was unable to suppress my tears I was told to go to another room. Not only did no one want to hear a wailing Black child, they didn’t want to see one either. So, I’d sit in the room bawling my little heart out feeling dejected and scorned because no one seemed to care.

Now that I’m older and have some education under my belt I realize why the Black adults in my life behaved the way they did. They were merely emulating the parenting styles they saw when they were growing up (and their parents did the same and so on.) Once I read bell hooks’ Sisters of the Yam and Dr. Joyce Leary’s Post Traumatic Slave Snydrome I realized that Black people continue to use parenting techniques, styles and corrective behaviors that they were forced to adopt in order to survive the conditions of slavery. If you take my relatives’ parenting style and drop it in the antebellum south or the sugarcane plantations of the Caribbean then their behavior is understandable. During those times a parent had to keep their child(ren) in line or it’s possible a White person (slavemaster or otherwise) could severely injure them, kill them or sell them to another plantation. Furthermore, a slave child had to learn from early age how to contain their emotions. They didn’t have the luxury of venting. All slaves (including children) had to wear an apathetic mask in front of Whites if they wanted to survive.

Unfortunately, many Black parents have passed these old parenting styles/survival techniques on from one generation to the next. As Dr. Leary so eloquently points out in her book, we no longer need to use these techniques. Black people are not subjected to the threat of White physical violence in the same way that we were during slavery, Jim Crow, and segregation (the exception being the threat of your local police department and their ‘routine traffic stops.’) However, in order to do away with those behaviors we have to know from where they originate and begin changing our behavior. That is toughest part…

So, what does slavery and the subsequent survival techniques adopted on the plantation have to do with Black women crying in 2008? What does it have to do with Jamerican crying? Well, it’s all connected. Starting from our childhoods, many Black women were taught to suppress our tears. Coupled with that, I, like many Black women, were handed down a legacy from our fore-mothers. We all suffer from SBW syndrome or Strong Black Woman syndrome to some degree. We have to appear strong, together and unruffled at all times. When you’re the glue that holds together a family or community it’s difficult to be vulnerable or open. You are the rock and people depend on you to be there no matter what. Black women spend so much time taking care of other people that we neglect ourselves. I’ve actually heard Black women say things like, “I don’t have time to be sitting around crying I have to get out there and [fill in the blank]”. It doesn’t seem to matter what emotional trauma we’ve experienced. We’ve been to taught to suck it up and keep it moving.

Furthermore, when you grow up in Black or predominately neighborhoods where people have been taught to prey on one another, one moment of weakness or vulnerability could make you an easy target. And who wants to be a target? Like many Black women, my worst fear is being deceived or “getting’ played” by someone. We’re not allowed to be vulnerable in that respect either because it’s as if we should’ve known. We always have to be smarter and one step ahead of everyone. And if an SBW should fall victim to a con artist, what are we expected to do? Put on our game face and “never let ‘em see you sweat.” We can’t allow anyone to know they’ve hurt us, then it’s as if they’ve won! After all, an SBW doesn’t lay around the house feeling sorry for herself- well at least she wouldn’t admit to it anyway… 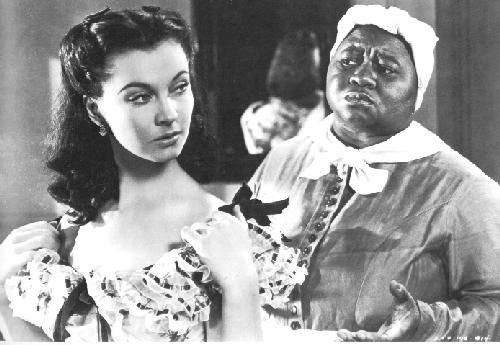 The SBW expectation extends far beyond Black neighborhoods and families though. Whether we were working as domestics in White homes or as an executive in the modern workforce, not only have we had to be the strong, resilient ones, but as I mentioned, we’ve had to be the emotional support for other people. I can’t tell you how many times I’ve comforted a White female co-worker who was reduced to tears over a minor or major infraction. If she broke up with her boyfriend or was yelled at by a supervisor it was acceptable for her to cry. In fact, the whole world stopped to comfort her. (And if you didn’t you were viewed as callous and cold). By the same token, if I displayed a similar level of emotion my behavior would be considered unstable, inappropriate or might be used against me at a later date (especially in a performance review). Having worked in office environments my entire life, I’ve learned that there is one rule for White women and one for women of color- especially Black women- when it comes to crying and vulnerability in the workplace. The sympathy is not there for us- period.

The Dance of Anger 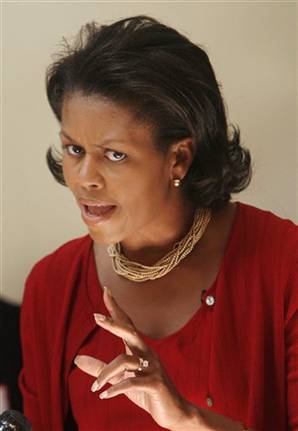 If there’s one emotion Black women have been allowed to display it’s anger. The reason is simple: anger is equated with strength, whereas crying is equated with weakness and vulnerability. (One could also make an argument about the way in which stereotypical portrayals of Black women as neck-rolling, bitter, Sapphires makes it acceptable for us to display anger or rage). As a Black girl I recall seeing my mother cry twice: once when she didn’t have money to pay the rent and the other time was when my brother passed way. However, I’ve seen her angry more times than I can count. The same goes for other female relatives of mine. If a man stood you up it was acceptable to become enraged. If you were passed over for a promotion at work or short changed by an auto mechanic- GET ANGRY. If you needed to you could confront the offending party, giving them a piece of your mind.
As I mentioned earlier, an angry Black woman can be a source of amusement or entertainment as long as you’re not the target of our anger. Where would shows like Maury Povich or America’s Next Top Model be without an angry Black woman? We put on quite the show when we’re on the war path. Over the years many of us have learned how to rip someone to shreds with our tongues. The audience sits enraptured, loving every minute of it. But when the cameras off and the lights are down, few people are thinking about the pain that lurks inside an angry Black woman. And maybe they don’t know that many of us choke back years of pain, injustice, devastation, suffering and grief all under the guise of appearing strong. When it all becomes too much, the pain escapes through the only acceptable emotions we’ve been allowed to display- anger or rage. And the world wants to know…why do they have such attitude? Hmm…

Solutions?
I’ve always said that Black people in general need to access therapy. Not because I believe we are an inherently flawed people. But when you think about it, we, as a people, have experienced an enormous amount of trauma. Our ancestors came out of the horrendous conditions of slavery with no therapy. There was no Dr. Joyce Leary, Iyanla Vanzant, Cornel West or bell hooks to help us work through the devastation. Instead, our ancestors focused on survival. (Some former slaves refused to speak about their lives as slaves and the unimaginable horrors they witnessed). After being slaves for so many years, we endured share cropping, Jim Crow laws, lynching, and segregation.

In 2008 we are still contending with police brutality, health disparities, black on black crime etc. But what about the psychological effects of racism and discrimination? What must that do to us as a people? What about inferiority complexes, self-hate, and so many other maladies that plague us? Somehow, after everything we have experienced as a people, we are expected by others (and even by ourselves) to be whole and healthy. We are expected to forget the past and simply move on. Yet many of us are merely repeating the vicious cycles that we saw in our families and communities. But I digress… 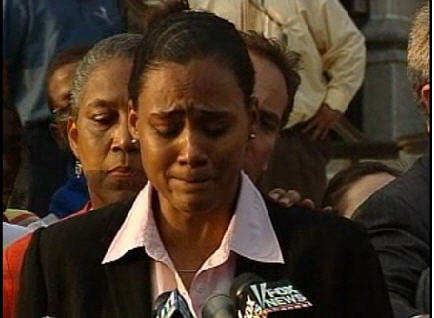 As Black women we deal with a lot. Some of us are walking around with undiagnosed depression. Some of us are rageoholics. Some of us self-medicate by drinking alcohol, taking drugs, shopping or using food as comfort. Yet we tell ourselves that everything is fine. We’re making money, we’re living life and we’re sane. But I think we should access therapy if we need it. No shame and no hiding from it. I don’t think that going to therapy qualifies one as insane or crazy. We just need to heal. Therapy is a wonderful place to start.

PLEASE NOTE: I do recognize the fact that there are Black women who no problem showing their emotions, vulnerabilities, tears or displaying their emotions in public. I know that Black women are not a monolithic group. We have varying life experiences, upbringings, families and backgrounds. If this post does not apply to you please consider that it may very well apply to other Black women.

This entry was posted in African Diaspora, Self-Development. Bookmark the permalink.